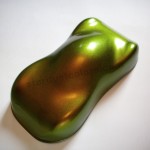 Scarab iridescence is due to the fact that its shell is composed of several layers of chitin (main component of the shell) in helical structure. Each layer gives a specific color depending on the distance travelled by light. The copper, gold or silver colour of  beetles depends on the number of layers and on the distance of the reflected light between the various layers. Their shell reflects light, providing beautiful iridescent, glossy and metallic colours. 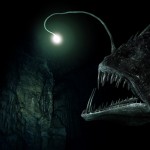 The light produced by these animals is called bioluminescence. It’s the result of the biochemical reaction between luciferin and luciferase, which generates a photon. For deep sea fishes, this light allows them to communicate, enable mates to come close, attract their preys or to light the ocean for hunting. Fireflies use that light to communicate with potential mates. Their organism produces a glow located at the abdomen level and that flashes on and off. 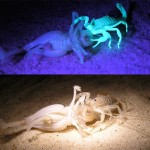 Scorpions have the particularity of being fluorescent under black light. Fluorescence occurs when some materials or surfaces are hit by light and they re-emit this energy as visible light. Scorpion fluorescence is due to the presence of chemicals contained in the cuticle of their exoskeleton. Thanks to these fluorescent substances in its durable but flexible carapace, the scorpion can emit a green glow when it’s submitted to a special light called “black light”. This property is called fluorescence. 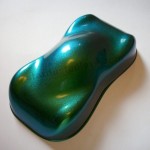 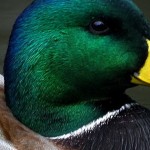 The feathers have two types of pigments, melanins (black) and carotenoids (yellow to red). Colours appear when the light hits the duck feather and comes into contact with particles of black melanin, which reflect only the blue component of light (black melanin absorbs the rest preventing reflection). At a certain angle and depending on the light meeting with yellow pigments that can distinguish a wide variety of colurs, feathers will be blue, green or black.